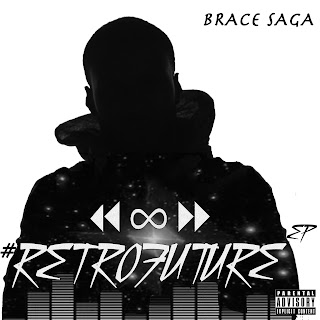 #RetroFutureEP has official dropped. This is an 8 track EP that gives you the ability to visualize the musical component worthy of recognition. (if you pre-order the cd you received 3 bonus tracks)
Check out the interview with the Artist.

Dion: Alright let’s kick this off with your first track, Badder, Now this song to me is a statement out the break. "Who wants it badder?" I can say you clearly want it. With this EP what was your goal, the end game for you?

Brace: First off thank you for having me. The goal for the #retrofutureEP was to make a hood musical like the Wiz, but in a hip-hop format. I’d got to thinking to myself, “ I would love the visuals to be this elaborate cabaret look, but still hood enough to bump down the street.

Dion: So you have a track entitled RetroFuture same as the EPs title, was it your intent to make this your single for the album?

Brace: I wanted to make Police State the single. I’d already had the name idea for a bit there. I had been looking into a form of art called retrofuturism, and I wanted to hear it. The more research I did, I eventually came up with Wild West motif for the song, and I just ran with it.

Dion: On the same track you have a line, “If you think Kanye a dick, you ain’t seen nothing yet." I had to laugh at this line by the way it just catches you off guard. Kayne is known for doing and saying crazy things but he is very intelligent. He makes great points sometimes. But what did you mean by these lyric?

Brace: I admire Kanye West’s intellect seeing how he can use practical logic opposite mad genius and get these working products out of that. It’s impressive. I studied that to figure out how to turn my level of genius or creativity into something else. I mean why not? Innovation is often held back by the fear of similarity, but similarity can bring progress if it’s worked with enough.

Dion: Ok so I definitely have to point out my favorite song at this point! SpaceTime! I think this is your single, the hit. The beat is laid back but in-depth at the same time. The lyrics just push the song over the edge. Plus I noticed the switch towards the end. The trumpets and the back ground "tick tock" set the song on a perfect visual. It has so many layers. What inspired this song?

Brace: I had this idea of 1945 Roswell New Mexico. It’s shot in black and white. There’s a colored only nightclub, and this space-ship crashes through the roof, and green women get out. I really wrote this one for the visual. I was sitting there thinking that would look so cool if I could shoot it.

Dion: I want to turn our attention to 2 songs on this EP that address issues that are going on now. You have 'Police State' and 'Primary Colors'. Let's talk about 'Police State' which I believe depicts a vivid encounter with a police officer tell me about this scenario, what was your basis from your perspective?

Brace: I was thinking of the mechanics of how songs work. People tend to shy away from the truth, especially when they can’t form a solution that works. But this is still something we need to talk about in terms of where our country is going as far as social maturity. People like love songs and certain vibes because they feel like this environment where things happen. I put the idea together thinking to myself “If I do a love song about police brutality, people might accidentally listen before they fight the truth off.” It’s a different approach, and maybe not the best, but it’s too early to call.

Dion: And 'Primary Colors'? You really went in on this track. You address many issue that are going on in the Black and Brown communities that are effected literal lives. You stated "America's more like Apartheid" and “Community leaders they reneged, and then side with our oppressors", this is very evident in what's going on today and the Medias' portrayal of black and brown communities. Can you give me your views on what's going on?

Brace: We hit terminal velocity. Essentially the wealth gap established by the business practices of the 20th century have lead to a relapse. We should be space age, but we can’t even trust skin color. It’s a cruel trick of those in power…. They have the poor fight each other for what’s left after they take their cut. The rest breeds resentment, hostility, ignorance. Our growth has been effectively halted in our communities because we lack purchasing power and localized stability. In the case of blacks in America, it doesn’t help that we aren’t responsible for our own publicity. I would love to hear more about young people graduating college, pursuing their dreams, but we hear about murders so often now. It’s not because there are more murders necessarily, but there are more cameras than ever, so nothing goes unseen. I just wish that was enough.

Dion: Now to round it out, 'Let the Beat Go' this is a happy upbeat song. Kind of Loungy, right? I dig the flow on this. Is this your laid back party joint?

Brace: I wanted to write the ultimate last call song where everybody hooks up and leaves on a good note. The night I met my fiancé, this song played on the radio called Love Ballad by LTD. It was so beautiful. I want somebody else to meet the love of their life while my song is playing. That’s like a moment that I wish I could be there for, but you know….

Dion: Brace this EP is legit! I enjoyed listening to it from front to back then back to front again. It's on repeat. What can we expect from you in the future?

Brace: I’d like to do a follow-up on this project. I’m thinking it would be nice to put together a nice lounge jazz joint. Something with a Sinatra Nancy Wilson feel to it. But more modernized.


Braces' music can be found: